Serving the communities of South Bersted and beyond since 1254

The present church at South Bersted dates back to 1405, when it was consecrated and dedicated by the Bishop Reade of Chichester before a large congregation.  The church incorporated most of the features of an original church, which had been a focal point of Bersted since the mid thirteenth century, with John Farndon the first named Vicar, in 1254.  The village of Bersted itself, known by its Saxon name 'Beorghamsted' (translating to 'Hill village place' in modern English), was part of the Hundred of Pagham given to St Wilfred by Caedwalla all the way back in the 7th century, and transferred by him to the Archbishop of Canterbury, who remains the Church's patron.  Bersted acquired Parish Rights in 1200, but it is known that a Saxon chapel dedicated to St Bartholomew was sited in Bersted and possibly connected with a small monastery in North Bersted.  No architectural remains have been found, but some stones bearing a Saxon stonemason's mark were discovered and built into the north wall of the chancel over the vestry door.

With the building of the present church, four large buttresses were added outside to strengthen the old church's tower, and, inside the tower, the outer and larger arch was filled in.  Italian-style frescoes were painted on the pillars and you can still see the traces of one of them (depicting St Christopher bearing Jesus over water) on the third pillar in the north aisle.  The faint marks of a Mass clock may also just be seen at the east end of the south aisle.  It is thought that the chancel was added in the 15th or 16th century, and at some stage internal galleries were built, where congregations would once have sat to worship, looking down on the rest of the church from above.

The church has undergone several stages of re-ordering, beginning with a complete re-pewing by Thomas Gray of Shripney in 1729.  Since then, the unsightly box pews in which individual families would have sat, closed in by small doors, have been removed, along with the galleries, as part of extensive restoration work between 1879 to 1881.  This left the main church structure unchanged, but with new pews and choir stalls, and the old thatched roof, which came down very low and was in a deplorable state, was cleared away and replaced with the present tiled roof.  To commemorate this restoration, there is a bust of Archbishop Tait of Canterbury over the north door, and corbels of Queen Victoria and Bishop Durnford of Chichester on either side of the chancel arch.  Further re-ordering took place in 1986, when four pews were removed at the front of the nave to create extra space for services and, only in 2001, additional pews were removed from the front and back of church to create space now used for coffee and fellowship after services.

All the windows are the work of James Powell and Sons of Whitefriars, London - the three-light east window replacing a two-light one and depicting two incidents in the life of Mary Magdalene: her conversion and the appearance of Jesus to her after His Resurrection.  A further Powell window was placed at the east end of the south aisle in 1905.

To commemorate the 550th anniversary of the consecration of the consecration of the church, a small clergy vestry was added to the north east corner in 1955.  Then, in 1967, a side chapel was created in the north choir aisle, furnished in memory of Arthur Frederick Ashberry, and a window was placed there in 1896 in memory of the Reverend Eric Wells, Vicar for twenty-two years.

For a long time, the church was served by a wooden hall in Gordon Avenue, but this was replaced in 1969 by the present brick halladjoining the churchyard.  This was extensively renovated earlier this decade to provide additional facilities and kitchen and office space.  It continues to serve several local organisations as well as Church groups and events.

The Spire
The distinctive bulge in the shape of our steeple has been caused by the king post being bent slightly in the middle.  The interior of the spire is entirely of heart of oak, on which 12,000 oak shingles were fastened.  In 1957, the spire was re-shingled and the roof re-tiled.  Further retiling was carried out in 1957.

The Organ
The original organ in the west gallery was presented to the Vicar in 1849 by the parishioners.  The keys could be pushed out of sight, and it could be played like a barrel organ by handle with a limited selection of hymn tunes.  In 1881 a new organ was installed by Walkers, and the present one was installed by them in 1955.

The Font
The current font, from 1898, replaced one from the 13th century.  Its oak cover with wrought iron handles was presented by Sunday School teachers and children in 1900.  Fragments of an old font, possibly from an earlier church, can also be seen.

Parish Chest
Dating from about 1200, this oak chest behind the back pews was originally intended for holding the priestly vestments, but was used between 1538 and 1827 to store the church registers, meticulously kept since 1564.  Now, these records (including church registers of baptism, marriages and burials since 1564) are looked after by the West Sussex County Council Records department.  Also amongst the church archives are a plan, register and index of monumental inscriptions in the churchyard.  Additionally, records of the Church School held by the Record Office include Head Teachers' Log Books dating back to 1878.

Village stocks
The remains of the 15th century village stocks, originally sited opposite the church, near the present footpath, were for a period held in the church's tower.  They are now viewable in Bognor Museum.

Churchyards might at first sight be perceived as rather dull places, but in fact the inscriptions on headstones and monuments can tell us a great deal about life in our parish in former times.  Some are intriguing and amusing, not always intentionally so (for instance, Charles Madgwick's inscription in 1889: "A loving husband, a kind father, deeply regretted by all who knew him"...), and of course they can offer key information for family historians.  Furthermore, South Bersted was the oldest and principal church in Bognor and, as such, its churchyard became the final resting place of many local worthies and some of wider celebrity as the town grew in importance.

There are tales, too, to be told of the churchyard.  In the 18th and early 19th centuries, Bersted was described as 'a haunt of smugglers'.  This was almost a cottage industry and involved virtually all ranks of society - even the vicar, it seems, had a part to play!  "Brandy for the Parson, Baccy for the Clerk", ran Rudyard Kipling's Smuggler's Song.  Tales of hiding booty in churchyard tombs are all part of smugglers' folklore - alas, they didn't tend to write each other letters, or keep minute books of their activities, so we are not over endowed with authentic records of smuggling.  However, for this area there are papers of the 2nd Duke of Richmond, who tried to stamp out smuggling, and there are also court records for those cases which were detected by the excise men.  There are even sound recordings made long ago with the descendents of smugglers.

West Sussex Record Office in Chichester holds the parish records for South Bersted, including church registers of baptisms, marriages and burials dating back to 1564.

A complete register and index of the inscriptions of the gravestones and a plan of the entire churchyard can also be consulted at the Record Office.  This is a heroic project completed thirty years ago by local historian Ron Iden and transcribing over 1750 inscriptions - many of which are not so readable today.

Records of the Church School can also be found at the Record Office and include Head Teacher's Log Books dating back to 1878.

To find out more about the history of South Bersted Church, West Sussex Record Office can be visited or contacted by following the link.  Our thanks go to them for much of the information on this page, and Bognor Local History Informationfor some of the pictures. 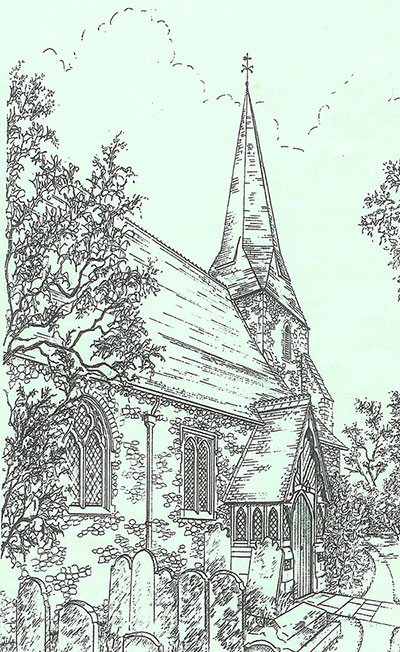